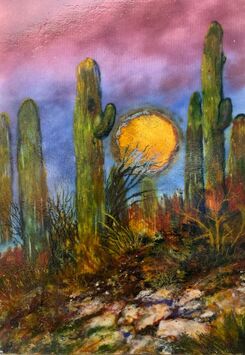 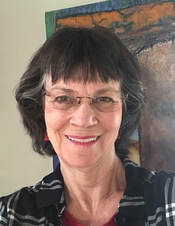 Anne Nye studied fine art at the University of Idaho and California College of the Arts in the 60’s, completing course work for a BFA. She worked as a graphic designer and illustrator for many years and in 1997 began working as a full time artist. Since 2000, Anne has worked primarily on her own in kiln formed glass developing her painterly style and techniques, but recently studied under Narcissus Quagliata & Ted Sawyer and completed an invitational residency at Pilchuck under the direction of Steve Klein & Richard Parrish.
“For me each piece I create is a story in the making. I begin with an inspiration, something I've seen or often part of a dream. Sometimes it's just a group of colors that seem to niggle at my brain, teasing me to play with it. Once I begin to play the search begins for the story. Much like a writer working out a plot, a dialogue develops with the piece."
A poet ought not to pick nature's pocket. Let him borrow, and so borrow as to repay by the very act of borrowing. (Samuel Taylor Coleridge)

Anne Nye studied fine art at the University of Idaho and California College of the Arts and University of Idaho in the 70’s, completing course work for a BFA. She worked as a graphic designer for many years and in 1997 became a full-time artist working primarily in kiln-formed glass, developing her signature painterly style and techniques. Anne’s work has been written up in several national magazines including Art Connoisseur, Glass Art Magazine and Western Art Collector. Over fifty galleries and shops throughout the United States and Canada represent Anne’s production line, which is marketed through IndieMe.com. Her work is also available on ArtfulHome.com and many pieces are held in private collections across the globe.  Anne also has a large social network where glass artists from all over the world following her ‘kiln openings’.

In the last few years, Anne has been in high demand as an instructor, teaching in Denver, Atlanta, Omaha, Tennessee, Phoenix, Winnipeg BC and Denmark. She also conducts select one-on-one mentoring/teaching workshops in her home studio each year.
Anne also continues to paint and recently began working in clay. She makes her home in Florence AZ along with her partner and mentor, ceramic sculptor, Jed Cossonay and their dog, Ezra, who both make her smile!